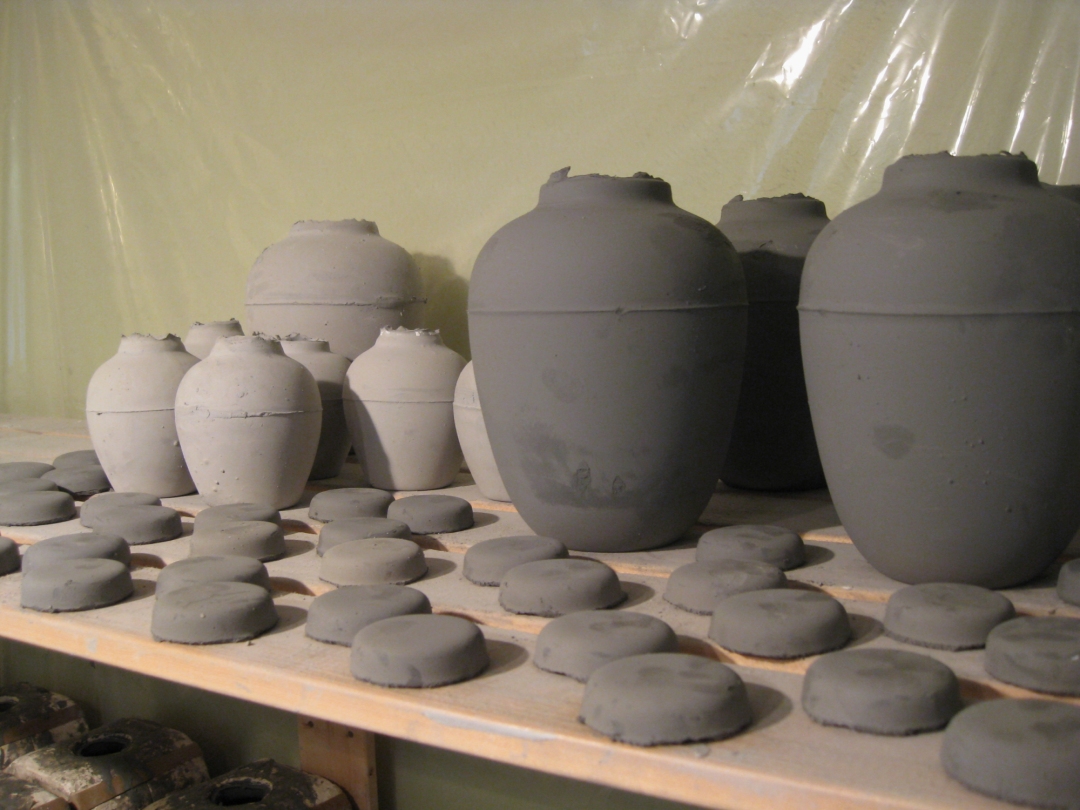 [In the Potter’s hands]

Working with clay in various different forms over the years has taught me a thing or two about the foresight and work that goes into molding a piece. Until I came to write this, I never realized that I’d even learned anything through the process, but just as so many things work their way into our hearts and minds little by little (sometimes without us even knowing it), what God wants to teach us can go deeper still if we allow Him to keep working (even when we don’t understand what He’s doing).

Clay that is tough and resistant is difficult to shape.  First it needs to be worked until it’s soft and pliable enough to be molded.  This takes time. Thus, it’s only when we are workable that God can have His way in our hearts.

In Ceramics we use a liquid clay called slip.  The consistency of this slip can dramatically affect the final outcome of the piece that you’re casting. The mold itself must absorb the excess water from the clay, which in turn creates the skin that becomes the body of the piece.  If the slip is too thin it will take longer for the mold to absorb the liquid, and if not timed correctly the piece will come out thin and fragile.  Alternately, if the slip is too thick,  and again not timed correctly to compensate, the piece will come out very thick skinned and heavy. Neither scenario is desirable.  A perfect casting produces a piece that is neither fragile, nor unwieldy heavy.  God too must time things with precision, applying pressure when necessary and reworking the clay to create in us what He desires. Sometimes, however, we can become resistant and unworkable.

God then explains that if at any time He announces that a nation is to be torn down and destroyed, but they repent of their evil, He would then relent and not inflict His plan of disaster.  Alternately, if a nation that He planned to be built up and planted did evil in His sight–not obeying Him–He would reconsider the good that He had planned for them. (Jeremiah 18:7-10). This is where Israel stood; they were the nation that God planted and had planned to build up; they’d done evil and needed to be reformed. God then warns them to turn from their evil ways and reform their actions, but He knows their wicked hearts, and He knows what their answer will be.

“But they will reply, ‘It’s no use. We will continue with our own plans; we will all follow the stubbornness of our evil hearts.'” –Jeremiah 18:12

If you read further you’ll find that God does reconsider the plan He has for Israel. He says that He will turn His back on them, scattering them before their enemies. (Jeremiah 18:17) This may sound harsh but it’s fair chastisement. The sad fact is that Israel had become a heavy load to the Lord (Jeremiah 23:33) However, it’s also not the end of the story. Out of God’s amazing love, mercy, and faithfulness, God has plans to once again redeem the nation of Israel in time (Jeremiah 33:8), but the picture is so much bigger than this.  Sometimes in our own struggles we forget the bigger picture as it becomes hazy with our own concerns.

We sometimes say that the end justifies the means, and here God applies the pressure needed not just for a nation that needed reformation but ultimately for an entire planet of people who need God’s redeeming grace.  Israel is an example to all of us.  Israel’s past is not only a warning to us, but it also sheds light on the hope we still have in Jesus Christ.  We don’t always accept that God is just, and we generally don’t want to accept anything but good from God, but Job reminds us that we should be willing to accept everything that comes from God.  When we fight it tooth and nail we’re ultimately only hurting ourselves.

“He [Job] replied, “You are talking like a foolish woman. Shall we accept good from God, and not trouble?” In all this, Job did not sin in what he said.” –Job 2:10

Israel had become a nation that didn’t want counsel or wisdom, turning against God’s messenger Jeremiah. Jeremiah pleads with God to act, for they have even plotted to kill him.  So God tells Jeremiah to go and buy a clay jar, and take along some elders of the people of priests.  Then He gives Him the words to speak regarding the disaster He will bring upon Israel.   He tells Jeremiah to break the clay jar, and then gives him these words to say Israel:

“’This is what the LORD Almighty says: I will smash this nation and this city just as this potter’s jar is smashed and cannot be repaired. They will bury the dead in Topheth until there is no more room.” –Jeremiah 19:11

We can choose to follow our own hearts, or we can trust God’s plan and heed His wise counsel. This may come through Scripture or through someone God sends into our life to help rework us. Disobedience does have some consequences. The Israelites were a very stubborn people who chose instead to plot against the messenger. (I can understand how this might make God angry.) This, however, wasn’t all that they did. In fact, they did many hated things–and this was a people that God had chosen to take by the hand: an ungrateful and unwieldy heavy bunch.

God uses clay pottery throughout Scripture to remind us that were ultimately fragile and not of our own making.  We are just the vessel that contains God’s power.  He can do with our lives what He chooses, yet we continue through many generations to be stubborn and strong-willed. Thankfully, we have redemption through Jesus Christ who paid the price for our transgressions–that is, if we believe, repent, and place our trust in the hands of the Potter. We can’t do it on our own. We need God in us, creating us as He sees fit–not as we see fit. We often take some kneading and even some breaking.  We hate it.  We fight it. We’re strong willed. However, God is still patient with us, not wanting anyone to perish.  His light will continue to break through the darkness.

“God once said, “Let the light shine out of the darkness!” This is the same God who made his light shine in our hearts by letting us know the glory of God that is in the face of Christ. We have this treasure from God, but we are like clay jars that hold the treasure. This shows that the great power is from God, not from us.”  2 Corinthians 4:6-7